We raised money for the EFF & ACLU with an NSA t-shirt :)

Note: If you'd still like a shirt, Charles Marshall has re-created the campaign (and did a better job of it, with more sizes and women's cuts!). Donations on the same terms. Get it here: SSL added and removed here t-shirt

So a few weeks ago my officemate Choong and I had a quick idea for a t-shirt. We put them online via Teespring and promised to donate any earnings to the ACLU and EFF.

Most people who ordered a shirt should have one by now. Mine came in the mail earlier this week and they printed up great (still need one? See below). 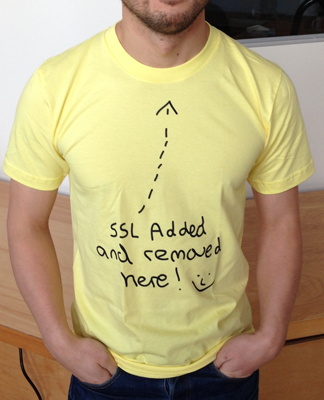 In a stroke of genius, someone on Twitter also took the vector art and made a mug, crossing out "SSL" in red and writing in "coffee."

Anyway, here's how things ended up:

I split the amount evenly between the ACLU Foundation and the EFF, donating $676.68 to each. That felt great! Thanks to everyone that bought a shirt! 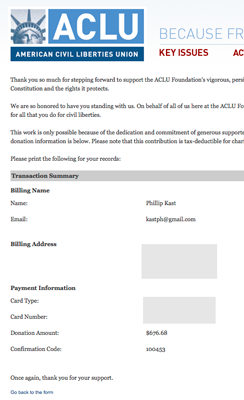 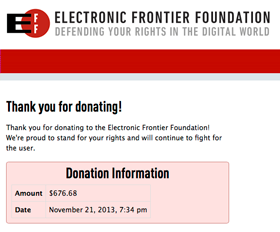 I received a few emails, and a bunch of people tweeted that they wanted a shirt but missed the sale. So it's back online for a second round, on Teespring again. There are about 6 days left to buy, so if you want one, get it here:

(Update: It's over now. The page was here: round 2 t-shirt page. See the top of this post for ongoing t-shirt sales)

Once this sale ends, I think I'm done with this project. But the vector art I posted before will stay online, so it should be permanently as easy as possible to print up your own.

The second t-shirt sale concluded in early December. 81 t-shirts sold. Per-shirt proceeds were the same as before. Avoiding PayPal the second time meant there weren't any transfer fees and earnings totalled $788.54. I sent another $394.27 to the EFF and the ACLU foundation. Thanks again, t-shirt buyers! Here's hoping for the vigorous defense of Internet freedom in 2014.